It has been a while since you last heard from me, and that is because I have been in Germersheim (Germany) to attend a course (specifically for conference interpreters) to add German as a C-language. I had been working from German for a while (for example at Europol and EWC meetings), but didn’t feel confident enough to officially add it to my CV, so when a colleague and I learned about the course, we immediately signed up. I can tell you: it’s been hard work, but very worthwhile! We now really feel that our knowledge of the German language is good enough to use it as a (passive) working language. We also realised that our active knowledge of German is still far from perfect, but well… we never intended to use German as an active (B) language anyway, so I can live with that ;-).

Fortunately, the course wasn’t all work and no play. 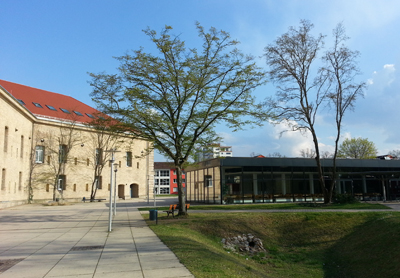 Germersheim is located in the Pfalz region, which is known for its good wines, so the faculty (which is part of the University of Mainz) had organised a wine tasting evening, as well as a traditional German ‘Kneibenabend’, which… also involves alcohol, so you get the idea. On the weekend, we visited the beautiful towns of Heidelberg, Speyer and Neustadt with the other ‘students’ (a UN staff interpreter from Geneva, a few EU-interpreters, and a number of interpreters working on the private market, all from different countries, including China). All in all, I couldn’t have wished for a better way to formally add German as a C-language!

Posted in Uncategorized | Comments Off on I’ve finally added German as a C-language!

Well, not exactly. As most of my colleagues will confirm, booth situations can vary greatly from one event to another. In my personal opinion, built-in booths are the best. Working at the offices of EU agencies or Dutch ministries for example, is a delight. The booths are large, with ample space for your bag, coat, computer, tea and coffee jugs, cups, pen and paper and the (sometimes large stacks of) documents, presentations, slides, etc. These booths have a view of the meeting room and a screen inside the booth for a better view of the speaker.

However, there are many situations in which a booth is not as spacious and comfortably situated as in the cases above. Last year, for example, we had to interpret in booths that had been set up in the loading dock below the Muziekgebouw aan het IJ (music hall in the center of Amsterdam). Not only was it freezing cold (so much so that we had to wear our winter coats inside the booth!), but it was also almost impossible to interpret because of noise of trucks being loaded and unloaded (see picture) 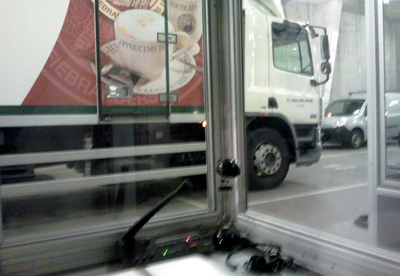 and the fact that until a few minutes before the event started, no one had even thought about putting up a screen so that we could at least see the speakers… Fortunately, one of the catering guys from upstairs was sweet enough to bring us lots of tea and coffee to keep warm, but this was definitely a ‘never again’ situation for all of us :-).

A few months ago, my colleagues and I found ourselves literally tucked away in the back of a room full of equipment, cables, boxes, etc. at yet another conference where the booths were not in the same room as the conference itself. It was a typical ‘find the booth’ situation (see below). Fortunately, this time there were screens. 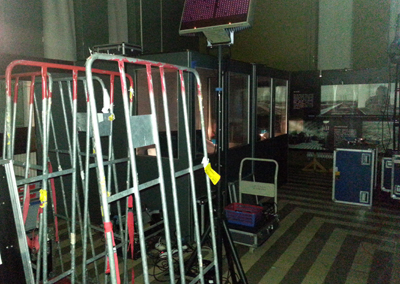 The only problem was that once the event had started, all the lights in the ‘back area’, as they called it, had to be dimmed. Which meant that it was almost impossible to leave the booth (to go to the toilet, for example), because you would immediately trip over something.

Actually, apart from built-in booths, the best setup is usually found at EWC  (European Works Council) meetings, because the booths are usually placed around the meeting table, so you can have eye contact with the delegates. 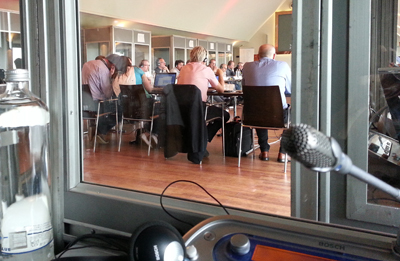 That is nice because many of us interpret for the same clients every year, which means that you get to know the delegates, and they usually like the fact that they can actually see the person who’s talking in their ear ;-). Depending on the number of languages used, a meeting usually looks like this:

Okay, that’s it for the booth stories. Until next time!

Was will die Kuh?

This year’s conference season started with a 3-day international meeting in the field of agriculture. More precisely: on cow health, barn design and the use of robotics at dairy farms. I never thought I would end up knowing so much about cows; their habits, their characters, their needs, their body language and the people around them. You thought dairy farms were run by farmers? Think again… In today’s world, barns are run by cow managers and cow coaches! To check the sound the manure makes when it falls on the floor to make sure the cow is happy (I’m not kidding…), to observe how many times she walks to the feeding area, to check whether she has sufficient space to move comfortably, and to make sure she lies down enough. 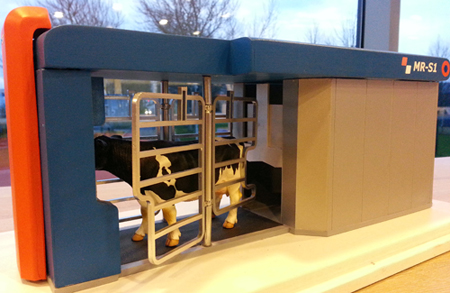 The more cows lie down, the more milk they produce. What is more, high-production cows need to be lying down a minimum of 14 hours a day. And here I was thinking that they liked standing outside in fields of grass, quietly eating the day away… Apparently, it’s the opposite. The more they rest, the better they feel, and the more milk they give. To the robot, that is. But why would they bother to walk to the robot? Because they are rewarded with concentrated feed when they do. And concentrate to cows is like chocolate to us… so I get them ;-). Once again, this conference showed me that with my job you learn something new every day… which is why I love it so much!

Posted in Uncategorized | Comments Off on Was will die Kuh?

Some weeks ago I was asked to interpret at an international conference on early school leaving. The conference was attended by people from several European countries, including Spain. I would be whispering interpreting from English to Spanish.

As usual, I arrived a bit early to check the equipment, find a good spot to sit and meet my colleague. I had asked for the name of the other interpreter beforehand, but the agency told me it was someone hired by the organizer himself, so they didn’t know. But they assured me it was a conference interpreter. You can imagine my surprise when my colleague arrived, introduced himself and said: “er… so how does this work? I’ve never done any simultaneous interpreting before. Would you mind doing the first bit, so I can see how it works?”. I didn’t know whether to laugh or cry, but remained professional and told him that I would start, but that he would have to take over after about 30 minutes, as is customary among conference interpreters. When I was done with the first half hour and passed him the microphone, I immediately noticed he had no idea what he was doing and could not keep up. At all…

While he tried to make the best of it, I emailed the agency to tell them this was not going to work. The Spanish guests looked at me with question marks in their eyes, but I had no intention to interpret alone the entire day and the next. After fifteen minutes, the other interpreter (who spoke Spanish quite well, but was far from trained as a conference interpreter) came to me and practically begged me to take over. I did, because I felt bad for the guests, and managed to interpret until the coffee break. During the break he came over to me and said that he should have never taken the job. The organizer had called him because “those conference interpreters are ridiculously expensive!” (which might be due to the agency, as my rates are hardly ridiculously high) ;-). A few minutes later, I received a call from the agency that the client had requested to please arrange for another conference interpreter ASAP… Fortunately, lunch had been planned early and the agency managed to find someone. Lesson learned by the client: pay peanuts, get monkeys!

Posted in Uncategorized | Comments Off on Penny wise, pound foolish

Trying to keep up…

At the request of a number of readers, I have decided to write the next posts on this blog in English. Hope you’re okay with that! 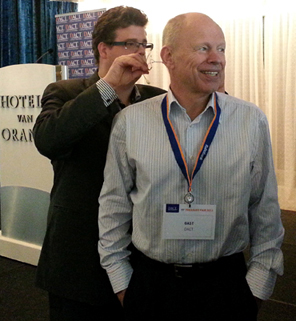 Last Friday, I interpreted the masterclass of Dutch former minister Vermeend at the Treasury Fair, an annual event organized by DACT, the Dutch Association of Corporate Treasurers. Professor Vermeend talked for about 2 hours about the future of social economics, finance, tax, internet, the corporate world, the gaming industry, the future of 3D printing, and many other things.

Unfortunately, there was no material to prepare for the job beforehand. Only a very vague description of the subject (the nightmare of any interpreter…). And on top of that, when I introduced myself to him, he smiled and said: “Ah, an interpreter. Great! You know that your colleagues at the European Parliament hated me? They always told me it was impossible to translate my speeches simultaneously, because of my pace. But if you’re translating into English, you should be fine!” Actually… he did have a point. It’s easier to interpret the speech of a fast speaker into English than into Spanish or Italian, for example, because Roman languages generally require more words (= more time).

Luckily, I knew what I was up for, because I also interpreted last year’s masterclass by economist and former state secretary Rick v/d Ploeg, who isn’t known for talking slowly either. Vermeend’s speech was great. He was right, I hardly had any time to catch my breath, because he wanted to share a million ideas with us, but his jokes, anecdotes and inside information made it great fun! Unfortunately, I’m not allowed to share the inside information… 😉 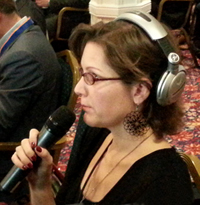 As you can see in the picture, I did not work in a booth this time. I used the so-called ‘whispering interpreting’ technique. Perhaps you wonder why only one of my ears is covered? Well… if I cover both, I would only hear the speaker. To avoid talking gibberish, I have to make sure I hear my own voice as well!

Posted in Uncategorized | Comments Off on Trying to keep up… 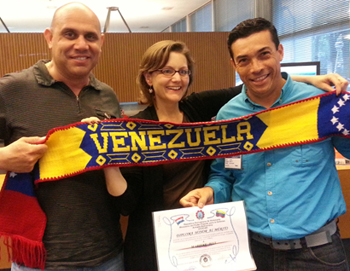 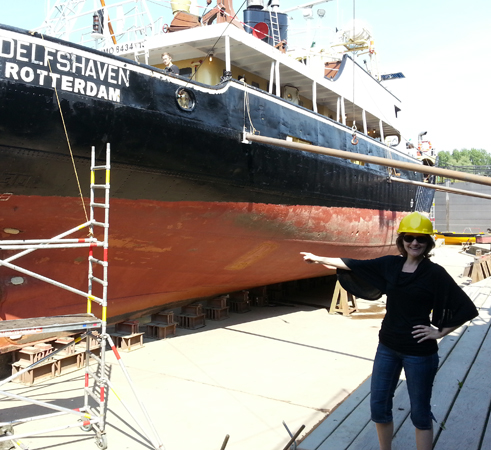 Posted in Uncategorized | Comments Off on ‘Scheepvaartdeskundige’ 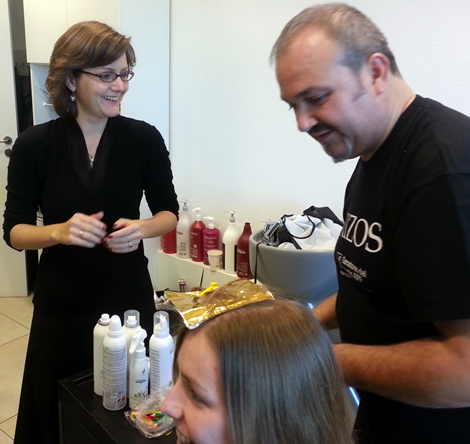